When you book with an account, you will be able to track your payment status, track the confirmation and you can also rate the tour after you finished the tour.
Sign Up
3463

Mycenae, Sanctuary of Asklepios at Epidaurus 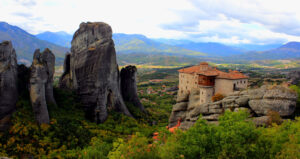 Galaxidi, Kalampaka, Thermopylae, Seaside Kammena Vourla (for a coffee or tea from us, on our last day).

As this is a totally private tour, our guests enjoy luxury travelling in the fertile countryside of Peloponnese and Delphi with stops-as-you-go,  to get acquainted with the local ways and Greek culinary delights. 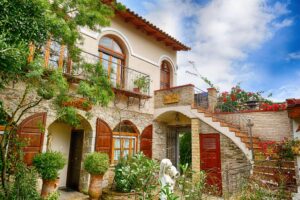 For your 3-night accommodation:   4-star or Boutique hotels (depending on availability and season).

Option: To reserve the tour with lunches in a selected dining restaurant.

A tour that will make you love Greece forever! 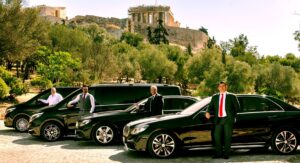 Start your tour with an early morning pick up from your residence and set off towards the Peloponnese peninsula. Driving for about an hour we reach our first stop at Corinth Canal, a spectacular construction project, six and a half km long, separating the Aegean Sea from the Ionian Sea.

After the Canal, you visit Ancient Corinth with the stunning Doric Temple of Apollo and the Bema, where Apostle Paul preached and wrote the First Epistle to the  Corinthians.

Next,  we ascend to the impressive acropolis of Ancient Corinth also known as Acrocorinth where the view is 360° and you can take incredible photos.

Leaving Corinth and going deeper into the Peloponnese, we reach 75 minutes later the Sanctuary of Asclepios at Epidaurus where we will admire the ancient theatre (you can practice its notorious acoustics), the

Tholos, the Stoa of Abaton, the Stadium and the Museum. 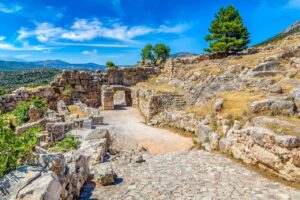 The next amazing site is Mycenae, the kingdom of famous Agamemnon, leader of the Greek army at Homer’s Iliad epic poem. Mycenae entrance is through the imposing Lion Gates, you walk by the graves of kings and the cyclopean architecture of Treasury of Atreus. A really powerful site.

Finally, we set off towards the medieval, seaside city of Nafplio. 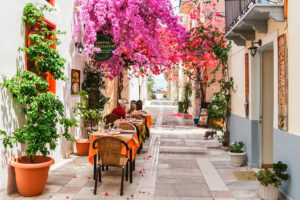 Nafplio is one of the most beautiful towns in Greece, the former first capital of the country, built in neoclassical architecture with narrow cobblestone alleys and surrounded by three formidable castles.

You will walk on the main Syntagma Square with two old Turkish mosques, with its many cafes and little taverns. Later in the day, you can enjoy a delicious dinner by the Arvanitia Sea Promenade, overlooking the Burtzi castle.

Have a full night rest in a 4- star hotel in Nafplio like Ippoliti Hotel or Xenon Inn . 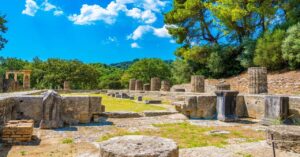 After your rich breakfast at the hotel, your driver will pick you up and you set off for our 2-hour drive to Ancient Olympia,  where we will visit the museum and the famous archaeological site of the ancient Olympic Games.

Olympia lies in the fertile valley of the Alpheios river and it was the most celebrated site of Ancient Greece. 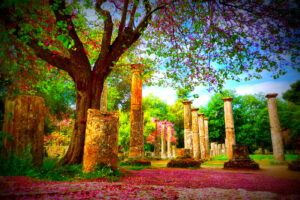 As you stroll by the ancient paths you will visit the Doric Temples of Zeus and Hera, the Bouleuterion, the Prytaneion, the Stadium, the Gymnasium, the Palestra, the Workshop of Pheidias and so many others.

After Olympia, we head northwest to another engineering miracle, the Rio Antirio Bridge.

(As an option, we offer free of charge a 1-hour visit to the oldest Greek winery, the Achaia Clauss for wine tasting and interesting facts on Greek wine varieties and methods before crossing the bridge).

Crossing it, we leave the Peloponnese behind us and enter the mainland towards Delphi. The first stop is Nafpaktos, a scenic little Venetian port and castle, a popular escapade

for a romantic weekend.

After a stroll and a cold cafe at the port, we drive to Galaxidi and Delphi where we stay overnight at 4-star hotels, like Ganimede in Galaxidi –  its breakfast is totally yummy – or Nidimos in Delphi, dependent on availability. 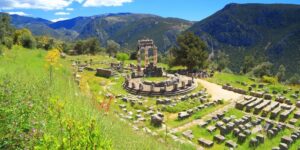 After your well deserved rest and breakfast at your hotel, your driver picks you up and transports you to Delphi, a remarkable archaeological site and museum.

Delphi, a UNESCO World Heritage Site, is considered to be the centre of the Ancient World. 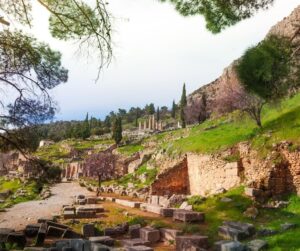 before taking any important decision. Thus, the site became massively rich and powerful and the excavated buildings prove its past wealth and abundance.

Our guests will witness the Temple of Apollo, the Amphictyonic Council, the Siphnian Treasury, the Theatre, the Tholos, the Gymnasium and the Stadium, which are some of the important buildings on the site.

The museum exhibits the history of the Delphic sanctuary and oracle, covering the long period from prehistory to late antiquity. Some of the masterpieces of the permanent collection include the famous Charioteer of Delphi, the Sphinx of the Naxians, and the statues of Kleobis and Biton. 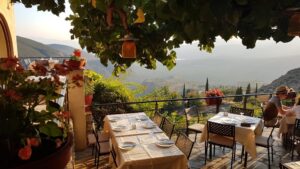 For lunch, we have chosen the best quality traditional food, service, and of high hygiene taverns in the area which combine an astounding view of the vast valley and sea.

Later on, we will make a stop at Thermopylae and Museum the battlefield of 300 Spartans against the immortal soldier elites of the Persian empire. There we can see also the statue of Leonidas, king of Sparta as a 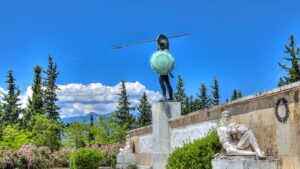 memorial of the battle.

After the Leonidas Memorial, we set off to Kalambaka and Meteora monasteries. Overnight rest at Guesthouse Iridanos

OPTION: You may be interested in a hiking or olive oil tasting tour in Delphi, please ask us for this addition to your schedule.

Next morning, after your breakfast,  you will ascend to the top of the rocks to visit the stunning Meteora monasteries.

This is a no-stress tour, with plenty of time to take photos, walk your way around and enjoy at your own pace. Your driver will take care of everything and will provide live commentary during the trip.

There are six monasteries on Meteora:  Great Meteoron, Varlaam,  Roussanou, Agios Stefanos, Holy Trinity and St. Nicholas. You will visit 2 or 3 of Meteora monasteries, depending on the day and time we are visiting.

Meteora monasteries date from the 14th century and are unique in the world because of the amazing treasure of Byzantine and Christian items you can witness. Items such as the classic attire of the monks,  elegant paintings and etched glass. 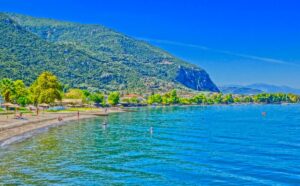 Our final stop is at Kammena Vourla seaside village where we will offer you, our courtesy, an afternoon coffee or tea by the sea view.